Jordan is a peaceful country surrounded by conflict: Palestine and Israel, Syria, Iraq, Saudi Arabia, with both Yemen and Lebanon nearby. Not surprisingly, Jordan has strong refugee programs — with more refugees, including 1st and 2nd generation, than native Jordanians. A constitutional monarchy, 98% Arabic and 95% Muslim, nonetheless the country is well accustomed to the welcoming of strangers and the concept of diversity. Ranked as 3rd among Arabic nations for individual freedoms, Jordan also leads the MENA region in gender equality — though still at 138th out of 149 countries by the Global Gender Gap Report. 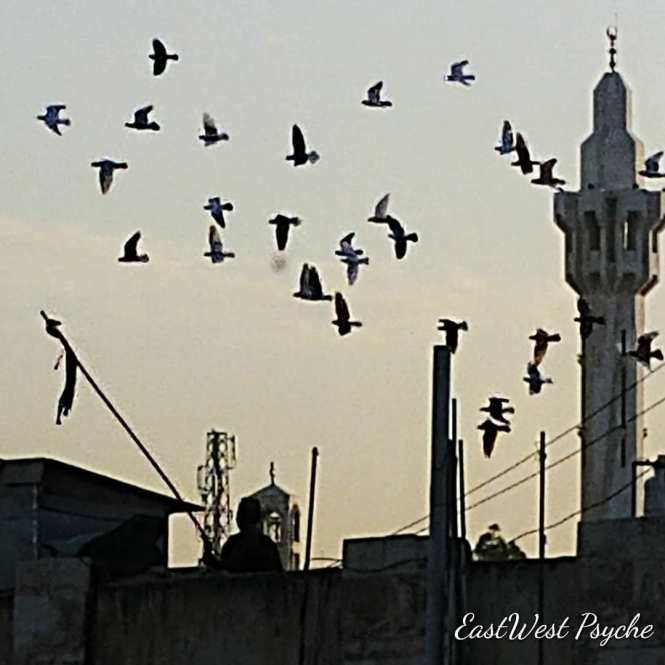 Some of Jordan’s traditions are still practiced, even in central Amman. A man exercises his racing pigeons at sundown, the birds flying in a large circular path in sympathy with his circling wand — as the call to prayer floats through the air.

Goatherding, another Jordanian tradition, is especially seen among its Bedouins who live throughout much of the countryside. But it’s even possible to see a herder and his animals in the city centre of Amman — a blend of urban and rural, even in the capital.

Jordan’s capital city of Amman has many modern components including the Jordan Museum, considered one of the best in the region. With a focus spanning heritage from ancient to modern and extending into the future, the museum reflects not only Jordanian culture but also its place within and awareness of Arabic influence in the world.

Art is a window into a culture, though its meaning is always subject to interpretation. This 2-storey street art in Amman, Jordan, in its depiction of male+female, provides a perhaps unexpected image in a predominantly Arabic and Muslim country. The mural, intended to express gender issues, is by 7 young Jordanian artists known as Akut of Herakut. Jordan has a highly educated female populace but less than 20% female employment and only 16.6% in parliament.

Considering Jordan’s neighboring countries, security in Amman is maintained by military personnel. The country does in fact have a high degree of safety, even though it’s currently engaged in the conflict in Yemen and actions against ISIS in both Iraq and Syria. The sight of heavily armed military and police, however, is common, and something citizens must live with — feeling more secure because of this armed presence, yet continually reminded of the need for it.

Amman, Jordan: a freak snowstorm in January 2019 paralysed the highways and airport, accompanied by lightning and thunder claps. Locals confirmed that, while the country never had snow in the past, it has occurred on occasion in the past several years. As this polar front moved through, a ‘maximum state of alert’ was declared — twice. This, in a ‘desert people’ and what is considered an arid climate — between the Arabian desert areas and the Mediterranean Sea.